Nostalgia in all its ways

Is thing thing on?

Is there anyone still listening?

Apparently, since you are reading this.

The wonders of the interwebs have pointed out, that I haven't written anything here for quiet a while. And i have to say, I am going to change that. I have some stuff up the pipe that I am going to share with you soon.

But for now, I want to share my thoughts of the past with you. Why? Because I have been asked to do that. The is this website doing "crates" with funky stuff in it for the big boys to toy around with. Most of the stuff seems rather... "nice to have" but, oh, would I love to lay my claws on a "DIY Pipe Set".
In case you are interested or are looking for a (honestly not really cheap) special gift check this out.
So, these nice people asked me to write about my first hobby experiences and what I think would trigger a feeling of back then.
To be perfectly honest, I think they go the wrong guy... I am not into arcade gaming (at least on this blog) nor into video gaming. We are doing the old fashioned gaming here. With moving actual stuff around.

But the question, how this all had started, triggered in fact a rush of memories, I want to share with you.

*Dreamy voice*
It was back in the days...

When Independence Day came into the cinemas (fitting, as it is coming back, isn't it?)... 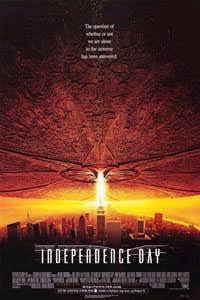 ... I remember that pretty well, because it took a key role in the few little steps of getting me into tabletop.
Back then, I had a girlfriend. And we were dropped off by her mother in the big city to go to the cinema to watch "Independence Day". But since she dropped us of way ahead of the start, we had some time to kill and started wandering up and down the street. Around a corner and a bit further down the street, we stopped in front a store with big black, red and yellow letters. Inside a lot of older Boys and Men we doing incomprehensible things... but the posters and pictures up every where were addressing the topics scifi and fantasy quite openly.
I remember that we were standing in front of the shop for quite a while, marveling at the things on display. I was fascinated, but shy and hesitant and if it hadn't been for Laura, I would have left the store where it was. And my life would have been quite different from now.

But Laura saw me torn between being to shy from entering the store and being fascinated and insisted on me going in and at least getting a flyer.

Games workshop and the people there we quite different from what you have today. And let it be put this way: It was better then. Would I have been addressed by those uber-eager "What can I do for you today?" super sales men, I would have stepped right out of the store again. No, back then, you were friendly greeted, left by yourself for a while and the cautiously approached. I left the store not with a starter set or a box or empty pockets, but with the feeling that these guys were the coolest I have ever seen and a flyer.
I vividly remember the red carped they had back then in the store...

Long story short, we went to the movies and watched Independence Day (which therefore will forever be linked to me starting tabletop, along side with pop corn :D ). Laura and I split up a few months later, but stayed friends...

The following weeks until Christmas were filled with me sitting in front of that flyer, staring at it and hoping that my parents would get me that starter set.

Guess what... they did.
And my soul was sold to Games Workshops Warhammer 40.000 (2nd Edition). The weeks that followed were willed with building the stuff, infecting the neighbour kids and spending the whole holidays in the cellar of a friend, battling through the days with rules we hardly understood (terminators can be unbeatable if you think the rules for armoursavemodification are too complex to understand and therefore useless. Since we didn't have a table of terrain, we used little clay houses my friends mother had build and played on judo matts. It was anarchic, very imbalanced and the end of all our savings. And it was fun. Fun as hell, a time wouldn't miss for the world.

There you go. Nostalgia in its purest form.

I hope this was entertaining for you. Next time... more hobby and more pictures :)
Posted by Hydra at 3:15 PM