Infinity is the new eternal

As some of you might have noticed, I have dissapeared from certain areas of the internet. On the other side, have I emerged at other places. This post shall enlighten those, who have wondered why this is so. Others might be able to identify with my situation or not.... ;)

I had never been as loyal to GW miniatures as GW would have liked me to. The lack of nicely sculpted female model invited me to some adventures across the border of Space Marines and the Grim Dark Future and even today, I can hardly resist when Hasslefree throws the next round of awesomeness into the ring.
Aside from picking up a model here and there (mostly on the SPIEL in Essen every year) I have never ventured further. I had my 40k Universe and lived under the impression, that everything I desired would fit in there.And for most of my tabletop life, this impression was correct. I found the escape from RL in games, campaigne, novels and ofcause the minitures. I joined a "community", took part in shaping that community and took responsibility for all the funny things that could happen there.

Especially over on Warpshadow I found people, that are like me and I have found many friends, who are more than just people that share a common hobby.
The fact, that I worked for GW was probably another reason for my so-long-loyalty. Lots of people from work turned over the years into friends, I don't want to miss and again, these friendships were not only funded on the fact that we enjoy toying around with metal and plastic miniatures.

My happy life in the 41st millenium could have gone forever...
...until I finished my studies, quit my job at GW and was overwhelmed by the tasks a grown-up-life throws at you.

I an instant everything changed. I have never been happy with the politics that work in GW and don't get me started on marketing and how employees are treated. But the more distance I put between me and everythng GW related, the more I didn't like what I saw.

The, out of the blue, Sedition Wars struck like a guilded missle.

I had everything I needed: A boardgame (so I didn't have to play in skull encrusted ruins anymore), a managable amount of models (no more 20+ Units to paint), a cineastic game setting I didn't had to come up by myself (take that "table-quarter-mission") and no more gothic-structures on scifi soldiers (have you seen the flying thing the dark angles sport? Looks like a flying cathedral... in a bad way...) and finally a game, that was playable in the time I could afford for it. Ahhh... plus an awesome little community and great customer services.

And part of my peers, that were willing to try something new. I guess that was the most important part...

Sadly the battle for Alabaster eventually came to an end. And coming up with missions on your own was way more difficult than we had expected. So before our newly found braveness in exploring new universes would subside again, we decided to venture out again and see were the tides would lead us.

But before we come to the obvious, a little something changed aswell. Games Workshop in all its wiseness fired almost all personel, that was standing in a store. The whole support structure, well working teams, friends and social structures torn apart in dubious stroke.
Not nessessary to say, that the doubts I had nutured all those years turned into a big blob of dissapointment, that covered the one thing that could have dragged me back: the new Tyranid codex.
When that was as dissapointing as I had feared, my heart and soul was finally free from the bonds that had tied me to that company.

And what do you do with freedom? Yes, you sell it instantly to the highest bidder :D

In this chase, it was Corvus Belli with Infinity.

I won't start the high praise-song. Let's put it this way: Infinity had to offer everything I had been looking for:
Cineastic scenarios, an ethusiastic community, awesome miniatures, great terrain options and designs, a company policy, that (as far as I can see it) I really like... and my peers, that liked everything above aswell.

Since then, I feel like I am  12 years old again, having my eyes pop out with all the awesome stuff available... but this time, I can afford most of it :D


So, I hope this explains a bit how I am were I am, and where I am not.

And as a visible sign of all this, I added a new section above, that leads you to all the Infinity stuff I am doing.
Posted by Hydra at 1:41 PM 2 comments:

Expectations and other errors

Greetings everybody.
Hyrda has finally reached the actual state of technology. This enables me to share my ramblings, thoughts and other stuff in almost real time.

What has happened? Well, since Feb ( as you might recall, that was pretty much the time when is blog slowly turned to hiatus) I am proud owner of a fairphone.  Well, I don't want to advertise here for electronic goods, but this project seems to be one of the "good" (good as in Superman-good).

Back to topic, expectations. This phone is one good example... I expected... Well something that probably only exists on the Enterprise. But instead it had nicks and nuts and sometimes even refused to work properly.

I could have easily switched back to my old phone or to some other brand. But I overcame my... Frustration and found out, that one of the reasons for several mis-functions were my own fault.

The same happened to me with my Nomads. Yes, I have officially left the path of GW And Warhammerb40k. But that is written on another page yet to be written.
My new passion lies in hackers, drones, skirmish warfare and the reenactment of one of my favourite series ever (Ghost in the shell)... Infinity. I am highly addicted to this game...

My chosen fraction, nomads, can have to really dirty tricks up their sleeves.
And here is the part where I get back to the beginning. I had 2 Gamez in a row today, which both left me pretty frustrated. I have questioned the game, the army... Even the state my models were in ( am I the only one who thinks models tend to die faster if you haven't painted them properly?).

Next time, I should stick to my survival-strategy that has helped navigate through all the Strom's life has thrown at me: look the maelstrom in the eye, don't make and plan and full force, Mr. Jonson.

Thank you, internet for listening to my brainwash. 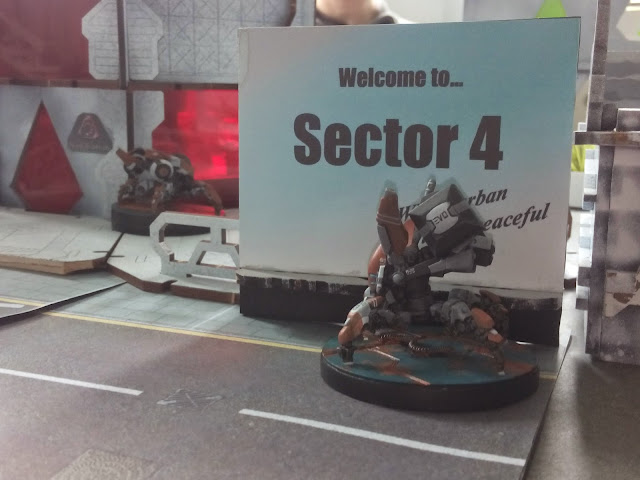 I have been asked a few times, how I did the Bases on my Infintiy Miniatures.

First of all, I use the bases from Sedition Wars. They are plain, give lots of details and variation and fit prtty much imho.

I guess the pictures are quite selfexplaining, but here are some thoughts in advance:

1. If you like the orange, grab GWs old Macharius Solar Orange where ever you can find it. Watered down it works wonderfull for rust, since it dries brigter than it looks, has differnt colours and tones and created this random appearance I like in rust. Sadly it is OOP...

2. Sponges: People playing Infinity will have come a cross tons of it and I have collected then ever since. These sponges work best imho, since others are to rough.

3. Vallejo Masking Fluid: First time I have seen someone use that was on these Infintiy Miniatures Step-By-Step thingies provided by Studio Giraldez ( StudioGiraldez ). Trick with this stuff is: Use old brushes, since they will be going down the drain. Use spronges for most of your work. The masking fluid will dry pretty quickly (withing minutes) and you won't be able to wash out your brush. So better use something disposable.
Best thing is to try it on something first to get a nick of things... before ruining one of your favourite brushes, like I did.

What you need:
-your bases
- black and white primer
- Paints. Since I still have lots of GW stuff I am using these, but the should be no reason, why you can what ever is to your liking. Only exception is the macharius solar orange I guess...
So, you need brown and orange tones for the "rust" and what ever you want to cover it up with.
- Sponges
-Vallejo Masking Liquid

Step 1 - Rusting
I primed the bases black and then gave them a dusting of white (means I don't cover every single inch of the base/model in white, but apply the spray so lightly in short bursts, that the lines stay black and the overall appearance is more grey than white)

Step 2
For starters I used a pretty watered down dark brown.

Step 3
With an  big random brush I mix some organe and lighter brown tones into the still wet dark brown. The brush helps to create random structures and swirls in the colour.

Step 4After everything has dried, I mix the Marcharius Solar Organge with lots and lots of water...

...and pour in generoulsy over the bases.

Step 5 - Masking
Prepare your masking stuff. Ofcause you can hold the sponge with your fingers, but I found it quite helpfull to use the pincers as seen on the picture.

Step 6
Now comes the fun part. Soak up some masking liquid with the sponge. Depending on the size of paint laking you want toachieve, it might be wise to dab some of the liquid of the sponge. otherwise you will have big blobs of liquid on your bases.

Now you lightly dab some liquid on the base. Don't worry about not reaching every corner...

Step 7
... since now you can use an OLD brush to conncet the dots and fill out the deepest places, the sponge can't reach. Remind yurself all the time: what every you paint now, will stay orange. I  always forget that and get a little trigger happy...
Another hint at this point: The thicker the liquid is applyed, the easier you can rub if off afterwards.

Step 8 - Covering
For my bases I use a tourquise in several layers, applyed with a sponge. The reason for the sponge isthe texture it leaves on the even surfaces. I want the paint to be a bit bumpy and texturised. It also goes really fast. If you do this technique on model like tanks or TAGs, you probably want to use a brush or (if you have) an airbrush to apply the coverlayer.

First with a slight mix of black in it.

Step 9 - Unmasking
Here comes the fun part. I haven't found another technique than to rub with your fingers over the covered areas and the peel the making off...

In the end you will get something like this:

Now a couple of metallics and you are done. The trick with the metallics is to use a rather dark one first and the really slightly pick up the edges with a bright metal.


So. That's it. I really hope you found this usefull of some sort :D