The Cabinet of Doom WIP

I promised you fresh stuff from my on going sedition wars quest.

Instead I bring you something else.

You might remember, that I have moved this summer (announcment: Soon I will do a little article about mancaves). With this I have risen to a new dimension of selfawareness.
I found the Home-Improver in me, the Tim Taylor of Tool Time...
All this was fueld, when I found a second-hand furniture store close by.
Long story short, being short on money, wanting a show-cabinet for my minitures and being inspired by the "Shabby-Chique"-Stuff my Nornqueen likes somuch I bought the following for an apple and an egg.

To give the cabinet a new paintjob, I removed the glass with my newly found skills...

I gave everything a coat of white laquer...

After that I used green acrylic paint. It was quite hard to get the paint covering up the laquer, but since I wanted to remove that paint layer, it wasn't to bad. I used a sponge and not a brush, avoiding the brush-strokes.

I mixed some brown pgments into the acryl paint to tone down the quite bright green.

After everything had dried, I took a variety of sanding papers to get the "used" look.

Since I have some nice metallic barock-application and the whole thing wasn't "Dark future" enough, I decided that I should hone my skills in barock design.
So I searched for some Input...

As soon as I have painted the barock application, I will glue it onto the door and provide you with some more shots.

What do you think about customising furniture? 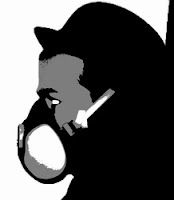 I finally find some time to continiue my retrospectation of my former projects.

Today I want to show you my Lictor Bust and the little story that is behind it.
In 2009 Mr.Moloch (as in Hive Fleet Moloch) and I decided to give our beloved Mr.Pink a visit. The reason were manyfold. That year, the Warpshadow Members organised a unique table setting, I had the funds and the time for such a travel and the stars alined in the right order.

But there is no visting our canadian friedn without crashing the Golden Demon. So, I sat down for, if I recall correctly, two or three weeks and let my sculpting tools and putty glow. All in all I managed to get three entries done and the Lictor was one of them.

In the end I didn't get everything done before the flight, which left me painting my stuff until the last minute before the flight ( I actually almost missed my flight because of that). Moloch was a bit annoyed when I instantly fell asleep on the plane, even before lift off (which is my favourite part of flying).

I shall tell you more of that amazing trip the next time.

The Lictorbust is one of the few very good documented projects I did for a demon. Probably, because I checked it almost everyday with the community on warpshadow, who where a great help. Especially since this was going to be my first complete scratch sculpt ever.

So, here are a few impressions of the different stages.

as obvious as it may seem, I started with the head, which gave me the rough idea of how big everything would become. I chose to stick the tentacles pretty close to the eyes, because I wanted their structre to be the texture for the next layer.

The connection of the tentacles to the rest of the head really gave me headaches. I tried for hours to figure out how to aply the structures that were shown in the sketches (back then provided by GW) to the model.
In the end it was my former nornqueen who simply said: Stop using your head... just sculpt :D

Next up the carapace. I wanted the carapace not to be the smooth surface you find on your avaerage tyranid, but to make "sense". The head carapace should be some bony structure, that gives some protection. From falling rocks... or maybe when it rains...

I started the torso with a rough build in Apoxy Sculpt, which was sanded into shape with a dremel.

As mentioned before the carapace should make sense in a way. Since my nids have stripes in green, I asked myself which biological process would result in stripes. I thought of shells and how they grow their carapace in layers. I imagined, that the lower layers where still freshly green and the older they get and the further up they grown, the darker they turn.
As I said, I wanted to sculpt this, not to simply paint it on.
I chose Magic Sculpt for that, since you can work really fine lines into the putty.

When the torso was done, I sculpted the neck, without glueing the head into place. That allowed me to remove the head for a seperate painting. The only problem was, that there was just one narrow angle that allowed the head to be removed...

The next step was to finish the "pillar". I wanted to add some structure, so that this area wouldn't be plain and flat. The aim was to create some organic texture, that wouldn't be mistaken as a extension of the torso.
ecause I didn't have any silicone clayshapers back then, I used the ends of some brushes in various shapes and sizes. The big differnce, in retrospect, is the way you can work into the putty. Apoxy culpt has the advantage over greenstuff in the ability to be compressed to some degree. That works especially well, when you have a "hard" tool.

After some paintslapping, here is the painted result.

Welll, that for now.

Next time, I will have some fresh stuff from the 2nd Wave of Sedition Wars...