Games Day Germany 2013 or Another Review

I know, it is almost yesterdays news and with GenCon on the run the Blogosphere is already busy with other stuff. I will sit down and try to give you my point of view on this awell.
Why?
Well, because I might offer you another point of view, so, if you are interested, hear me out.

The great Picster from Massive Voodoo  and last years Slayer Sword Winner told me, that a blog should be like a diary and since not much people care to comment on blogs you should write it for yourself in the first place. So I will stick to this advice and start at the beginning.


March/April 2013
Who ever cares for Games Days surely has realised, that this year is something special.
Lots of Games Days have "died" or "disappeared", which became evident months ago. If there would be a Games Day in germany noone knew for a very long time. There were rumours that the Games Day Germany should move from the honored and old halls of the Gürzenich to a convention hall. Between us, I heard the rumour that it would have cost even more than in Cologne.

So, you can imagine, how happy I have been, when the german Games Day was announced.


Honestly, I did not follow all the discussion about ticket prices and "if it was worth it" and so on.
But I thought I should give the vent a closer look on what you get for your money tis year.

June
An ex co-worker called me and asked me, if I was willing to put some of my armies in the cabinets. What shall I say? Of cause!

August
Due to the house improvement work, the move and my upcoming exam I was (and still am) "man-cave-less" which meant, I could not really perpare anything for the Golden Demon. This meant a whole new experence for me. Since my first Games Day, I have ALWAYS entered something. Family and Ffriends know that in the weeks before I am good for nothing since I am working of stuff to enter.
Well, this year was different in that way too.

Due to the fact, that the fate of the future Games Days is still in balance and if the rumours about the ticket-sales are true, the Big Bad British Badguys won't think twice about cutting of what lots of people love.
But this is future talk.

Bearing in mind, that this could be the last Games Day in Germany, promised myself to make it count.

Saturday
So I did what I did last year (and all the years before that):
I arrived on Saturday, went to the Gürzenich, set up my models, met old friends and was done for the day.


To get the following straight, here a little disclaimer. For those who don't know it, the bitter truth:
I have worked for Games Workshop for more years than I care to count and I don't regret a second of that time.

That's why I didn't join the communities "Painters Dinner" that happened Saturday night (though I love the fact the people do such a thing!) but followed the invitation of my old co-workers to have dinner with them.

We were enjoying way to much meat and beer, when my plans for that weekeend took a drastic change.
The Games Days organisator got a call, he turned a little pale, before he turned to me with a mix of a shark-smile and pure dispair. The prime judge for the Golden Demon had called in sick and since I had done the job several years, he asked me if I could replace him.
Well, I would miss out all the other attractions, but I would do, what I love the most on Games Days (marvel at awesome miniatures) and help someone in need.
What an honor.

The streets looked like I felt that morning. Quite hungover.


I will try to give a little review on the Games Day as such at this point. I did not have the chance to visit all of it and missed out on the programm they had in the auditorium, but I think I got a quite good view on the event.

If there had been a drop in sold tickets, it wasn't quite noticable. The were people all over the place, though, that also might have been due to the new organisation of the differnet areas, there was no "packed" space. When you think of lots of sweaty people, that was a really good thing imo.
The only thing that could have been better was the placement the guys from "Team Germany" got. The gallery they were up on was a little off. But I heard, that this already had been registered and should be changed next time.
So, Area-Organisation:

The things you could do (aside from buying stuff) were mainfold. I can't remeber a Games Day where you had so many activities. Aside from the mentioned shows, where famous people like Roman aka Jarhead talked about the stuff they do and love, you could go to the "conversion hall" as I called it. Terrain Workshops, Speed Painting and Scratch Demon awaited the guests. I was highly astonished by the fact that the Give-Away activities were not some random, crappy sprues, noone needed anymore, but brand new anf fresh sprues. You could have easily put a talos or cronos together and walked away with that. Same goes for the terrain worshop.
But you also had game stations for all kind of gaming, from "bring your own battle" to the computer games, from the obligatoric shop-tables to the specialist games corner in the cellar.
If I recall correctly, there have never been so much great stuff to do on a Games Day.

Aswell as the activities, there were many studio guests with, what seemed endless patience to answer as many questions as possible. It is always a blast when you come a cross such great people such as Phil Kelly.
Call me a fan-boy, but what ever this man touches turns into greatness.
I am just hoping that he will have his claws in the next tyranid codex.
He could have told me, if he had, but that he would probably have killed me.

Seriously, what else can you wish for, than to meet on of the coolest authors there are in this company (next to the other great guest that have been kicking around)?

My workplace that day.
What can I tell you?
I have seen alot, but quality wise,
this has been the thoughest competition I have ever witnessed.
Probably due to the fact that other countries didn't have a GD this year, the who-is-who showed up and filled the cabinets.

Another sign of quality IMHO is the winners names-list. In the last couple of years, some sort of clique had formed. The winners were a small group of people, wandering of with four or six demons under their arms. If you look at the winners this year, you can hardly find someone who has more than three.
That shows, again imho, how high the quality, how big the diversity and how tough the competiton was.
I am really happy, that I had the role of the King-Maker and was not part of the competiton.

So, if you would ask me if this all is worth 50 €, I have to say: I can not tell you that.
Everybody has to ask himself if he is willing to pay that amount. And I can totaly understand when people say, they don't have the money.
All I can say is, that I am willing to pay 50€ for a day. A day of meeting old friends, finding new one... ect.
Everybody asking after the worth, should have a look at concert tickets and what you get there...
I would love to go next year to Games Day Germany.


So my conclusion of the review part is:

But now, onwards with the diary-part.

I don't want to tell you again how mind-blowing the Golden Demon Competition was.
So much dedication, spirit and passion on a spot makes you stagger. I am really happy, that I have some
experience in the judging process, but I still remember the first time I had to judge, Afterwards I had nightmares, since I felt the preasure of all the people having not won on my back. And I know how that feels.

I won't bore you with the process of the judging.

But I would like to point out two extra-ordinary happenings from this Golden Demon.

The first has been on the blogs all over the place.
The sword winning entry.
The first time I saw that diorama, something in me stired and made me return to marvel at such a piece of greatness all day long. I can't remember having seen anything the like before and I don't say that, because I love nids.
The composition, the details, the colours...all made of pure awesomeness.

When the winner was announced, I was highly
surprised to find that it was Roman. A couple of years ago, he had done something with nids aswell and I had to tell him that he could have put more love into the countless stealers and gants and warriors... it appears he had stuck to that critism :D

A well deserved victory.
Thank you Roman, for such a fantastic piece of art!


The other incident I want to talk about shall be given not to much room. But I have to voice my anger and give my rage an outlet.
During the demon celebration one of the "winners" was not very happy with his scoring.
For reasons unknown to me, he appeared really frustrated, which resulted in a dishonorable treatment of his demon-trophy. At that moment, I felt the urge to take it away from him.
I have never witnessed such a disrespectful behavior, not just against the jury (you will have to live with fact that not everybody can be top3) but also against all the others that have won a trophy.

But as I said, I don't want to give that to much room.

Thank you everybody for making that day such a blast!

Concluding, I have to say, that, from the depth of my heart, I wish I can say the old GW-figure of speech:

After Games Day is before Games Day

I am really looking forward to this one.

It will be a whole new experience, since I will change a lot  of my Games Day- Routines.

I hope I weill find the chance to give you a decent "review" next week :D 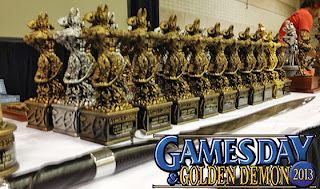 Is anyone out there?

Well, just in chase you haven't forgotten all about htis little blog, I haven't aswell.
My big plans of making a diary of house improvemnt was swallowed by actual house improvement. 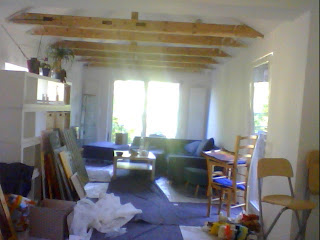 As you can tell from the picture, it looks more like a cultists mindscape than almost 3 months of work,
but we are getting there.

Way more important and probably more interesting to you is the fact,
that my Mantis Warriors and my Cult will be travelling.

Travelling in to some exquisite show-cases on

next week in cologne!

So, as soon as my Spawning vat is back up and operational you can expect more miniatures here and less rambling ;)

See you on games day!