How to Toy Cars

As many others I have come while building a city table to eventual problem of empty roads and loooong firelanes there.

In this article I am to show you how to implement toy cars into your tabletop city. 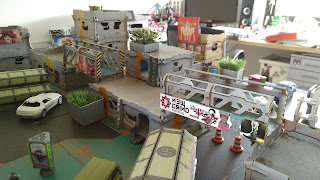 Every once in a while our local supermarket offers some toy cars, that fit scale wise prett well on a infinity table. There are lots of articles out there about the usage of the right scale... I just estimate roughly if the car would fit on the table or if it would look to big.

Now the real challenge is to get the looks right for it to fit on the table and your terrain.

Of cause, you could simply prime and paint it, but that would loose you some fine sculpted interior and some clear plastic windows.

But most of these collector cars have some trick to help you with that... 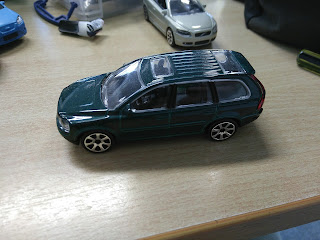 Each of these cars  is assembled during its production. You task now is to find out, how it is build. Some manufacturers use screws, others some funky clip technique like the one below.Take the cars apart until you have all the single pieces. You now just need the die cast piece. 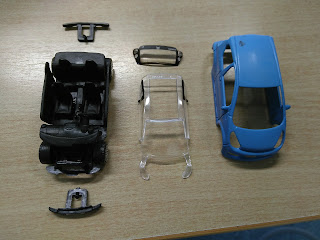 Paint the diecast piece. For that, prime the car black. After the primer has cured, paint the car. You could use the technique I have described here, using spray paint.

If you fancy some racing stripes or weathering, now would be a good time to apply them.And Voila!

After the paint has dried, give the car a good coat of gloss varnish. This will create a strong protective layer. Since you don't want the car to shine, like it's been latex covered, give it a good coat of matt varnish affterwards. 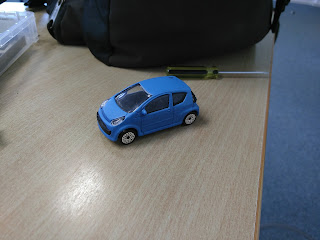 And.... vila! From afar there is not much difference (wel... it is a little less shiny...) but if you place a model right next to it, you will see the difference to an untreated model.


Again, time is of essence here. Using this approach, you shouod be able to get quickly lots of cars done.

I hope you found this quicky usefull! Until next time!
Posted by Hydra at 2:48 PM