Greetings fellow hobbists!
It has been quite here for while, which was partly due to no content that was produced, but now, I am back on track, sort of.
A year ago, my lovely wife gifted me a set of Masters of the Universe Miniatures form Quest Miniatures. Although I love MotU, I had no reason to get paint on them until a friend asked me to play Frostgrave with him. Since Frostgrave offeres games to use what ever they like for the game, I saw the chance to finally get Skeletor aand his gang finished and put to good use. But the quest was: How did Skeletor leave the wonderful planet of Eternia and end up in Felstad, the place Frostgrave plays in?

Read it after the jump. 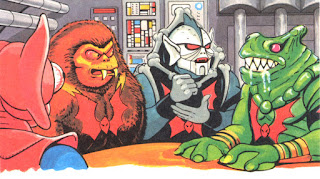 Horad, the leader of the evil horde, entered his command room. Next to his hand picked honor guard of Horde Troopers, three of his most trusted lieutenants were present: Mantenna, Grizzlor and Leech.
The deep red glow of his eyes announced his bad mood.
"Whatzch se matter, mazzter?" Leech asked.
"I have enough of this!" Hordak shouted and slammed his hand on the desk.
"Enough! Skeletor has failed once to often! If he keeps this pace of failure, I will never rule Eternia. And I need to rule Eternia, or I will never overcome this ridiculous rebellion! I wish I could get rid of Skeletor and finally get to work on Eternia on my own!"
"M-m-master..." Mantenna mumbled, "I m-m-might have the s-s-solution to your p-p-problem.
O-o-on my travels o-o-on Eternia, I h-h-have discovered the long f-f-forgotten ruins of R-r-rakash Dol Ahm."
"Rakash Dol Ahm?! The Castle of Portals?!" Hordak almost screamed. "The legend says, withing the fortresses walls are hundreds of dimensional portals hidden."
"Y-y-yes, m-m-master. B-b-but all the portals a-a-are closed. E-e-exept..."
"Aye! Except for one..." Hordaks faces turned to an evil grin. "And if Skeletor walks through that particular one, he will never come back!"
"But what about his henchmen, Hordak?" Grizzlor growled.
"We need to make sure, they go with him... and then, muhahhaha.... and then... mhahaha... I will send He-Man right after him! Hahahaha!" Hordak laughed and his minions joined his laughter, filling the command center with nightmarish noise. 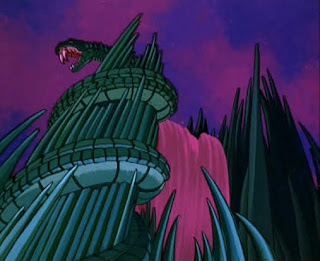 The dark clouds above Snake Mountain appeared even darker than normal, that night. And the flashes, tearing the darkness apart, appeared a bit more threatening.
Two of the most evil minds that have walked on Eternias planes came together in that fateful night, to sit down and talk about dark secrets and monstrous plans, circuiting each other like suspicious cats. 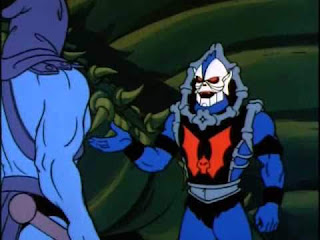 "Skeletor!" Hordak said patronizingly. "It has been to long..."
"Hordak, my old Master!" Skeletor answered poised. "It has been long indeed. What a pleasure to have you here. How do I deserve this honor?"
"I have witnessed your latest tries to overcome He-Man. And have seen your... defeats. I have come to offer you a solution to that problem."
"How most intriguing. Continue."
"My spie Mantenna has discovered the ruins of Rakash Dol Ahm, also known as the Castle of Portals. Within this fabled castle, portals to other dimensions are hidden. Most of them are useless but I have identified the `Portal of  Dat Slef´, a dimension full of magical artifacts and wondrous relics. I am really sure that you could find the weapon to over come He-Man once and for all there." Hordak alluded.
Skeletors eyes narrowed. "So... when so many fabulous items are so easy to come by, why did you not take these precious artifacts for you own?"
"Well, my former apprentice, the other dimension is no peaceful place and a venture there is to a certain degree risky. As you know, most of my troops are busy fighting that preposterous rebellion on Etheria and I dare not to venture there on my own. You, on the other hand are more... powerful and ... resourceful... than I am on Eternia."
"I see. Let me call in the council of evil and we will discuss that proposal." 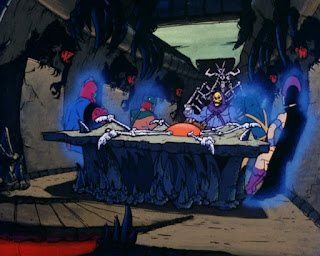 "So. Now you know why Hordak was in Snake Mountain." Skeletor announced. The glimmering projections of his Evil Warriors filled the throne room. Within seconds a heavy discussion broke loose. While some argued, that it was possibly a trap, others claimed that, if true, the price to be gained could help them to finally conquer Grayskull.
Skeletor let them have their shouting for a while. With a blast from his Havoc Staff he ended the discussion after he got tired of it.
"Friends! If we don't go, Hordak will think, that we are weak and turn on us once again. Together we are strong enough to tackle any obstacle in that dimension. And if we are successfull, we could rid ourself of that muscle monkey He-Man and take over Grayskull once and for all." 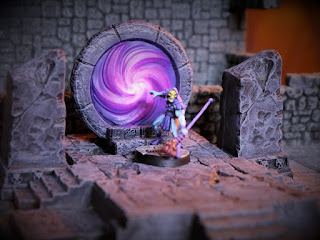 Hordak watched with growing satisfaction how one after the other of Skeletor's Evil Warriors disappeared in the swirling portal. Once the last had passed, he turned to Shadow Weaver, who was floating right next to him. "Fools," he growled "the don't know, that this is only the entrance to that dimension."
"So, you mean, they can not return through this portal into our dimension?" Shadow Weaver hissed.
"Exactly. It is a one way portal and I doubt that there is another portal on Eternia that can take them back. Only the most powerful wizard could turn the dimensional direction of this portal around. And Skeletor will die of his own gabbiness before he becomes that powerfull."
With these words, Hordak turned around and left the now empty cellar vault, laughing darkly.
Posted by Hydra at 2:45 PM