It has been over a year, since I have started to play (and to love) Frostgrave and shortly before christmas, I have finished my first campaign (Thaw of the Lich Lord). The final scenario had a special treat; while in all the games before, we had to smash each others heads in, now, we had to fight together against the game itself.
And it was a blast.
So we decided to play Frostgrave: Perilous Dark  , a coop version of the game, next. We almost had everything ready, when the Corona-Crisis forced everybody to stay home.
Surely, the campaign is designed to be playable as a solo campaign aswell... but... in times like these, it is nice to share the hobbylove with a fellow mind and get some well deserved distraction from the world going mad, right?

So, we decided to play our beloved Frostgrave... just remotely.
How we did it and how it worked... after the jump.


It was actually my wife who ignoratly said "can't you play via skype?". I was about to answer lengthly, how tabletop is not like a computer game, where everybody sits at home and stares at their screens... when a tiny voice in my head muttered "but... maybe...".

The first idea was, like in online chess, to set up a table at my place and at my friends place and move things as sychronised as possible. But pretty quickly it dawned to us, that this was beyond possible.

So we dubbed for the following:


HOW TO PLAY FROSTGRAVE REMOTELY:

- 1 Actual Player (the Talker: the one who can describe well, what he sees)
- 1 Remote Player (the Thinker: the one who has the better spatial sense)
- 1 Board, Dice and all the gaming material ( my remote player had his wizard and his warband shipped to me vial mail,)
- 2 or better 3 Skype accounts with the respective decives (We had an IPad, a smartphone and a Laptop)
- Pokerchips and/or paper
- The urge to play and the interest for a new experience

To make it a bit more understandable how we set up I made some expainatory pictures: 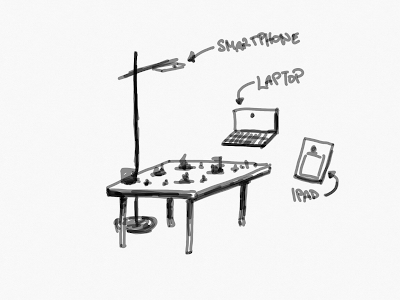 The basic question was: what does the remote player need to feel as involved a possible?

Firstly an overview; that's the smartphone camera for. I chose the smartphone, since it is light and therefore easy to tape to a stick or, as I did, to an easel.

Secondly, you want to talk to a face, not to an everchanging screen. So, I used my Laptop as the "face camera" where I could see my mate, where he could see me and the room I move in.

Thirdly and probably the least important camera, was a mobile camera. I used that to have a "tabletop" look camera, the one you could use for LOS checks or to show specific details on the board.

I would say, it work pretty great. We had a fantastic game  and awesome ~4h of gaming fun. Of cause, we had to work out things and it had been a bit since our last game, so we were a tiny bit rusty at first (plus the obligatory small talk along the game), but I think, the next game won't take so long and we already have set a date for it to happen. 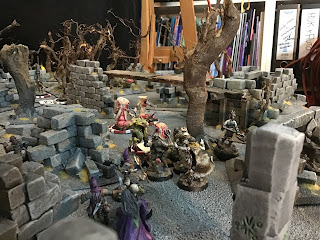 The game mechanics help a lot. The rules are simple, yet elegant and the D20 cares for some really suprising events. 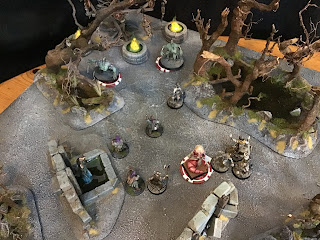 The top down camera (my smartphone) plus my internet connection (1mbit upload max) swallowed quite some details of the board. One way to compensate for that was lots of talking. The other thing that helped was a set of pokerchips. As you can see on the pictures, the enemy models were placed on red chips, the treasure token were placed on grey (next time I will use green... way better to see). This way it was easier for my mate to spot the positions of the units on the screen. A bit like in a computer game, where units have those blinking circles around them. I will have some magnets under the units next time, so the pokerchips will stay in place and don't need to be moved seperatly, but that is just a cosmetic detail.
Another thing I found really usefull were some PostIt paper pieces (the ones with the sticky part on the back). I tore small pieces and wrote down the health points of the wounded monsters on them. Yes, you could have used dice aswell for this, but the sticky paper stuck to the heads or the poker chip made it quite easy to tell them apart (in a CC with several creatures plus you own heros aaand the one from your mate...  that can be tricky to have dice in there aswell...) 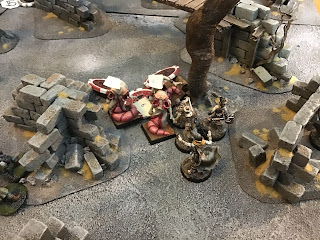 Another great thing that helped were quickly cut out templates. As the "Fog"-Spell is, next to the "Wall"-Spell, probably one of the most important spells in the game, you will need quite a few templates. Sitting next to a stack of paper with scissors close by made it pretty easy to quickly have enough templates for the whole board. Another pro of those white paper circles was, that they are easy to spot on the screen for the remote player. 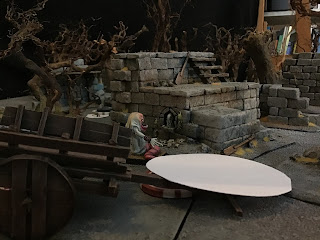 Since my wife needed the IPad during our game for a while, we had to play with out it for a bit. It actually made things a bit easier, since the different windows on the remote players screen were fewer and there fore easier to see. After I got the IPad back, we dubbed for a different solution: In situations where LOS needed to be checked or the top down camera could not clearly enough show the situation of a CC or when the "on the board"-view was just so cool, I didn't want my mate to miss it, I took a picture with the Pad and uploaded it in the skype chat. That helped a lot for the remote viewer to gain that tabletop feeling.
The following pictures have been taken during the game for the explained purposes: 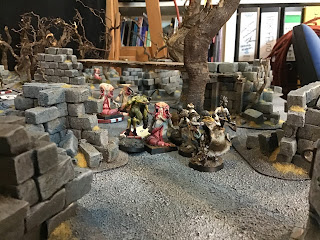 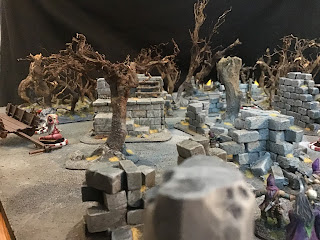 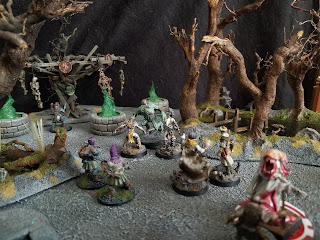 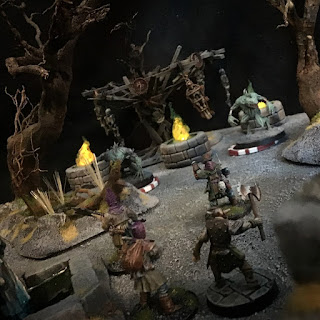 Of cause, it is not your typical hobby night out. Of cause, real tabletop is better. And I am pretty sure, the whole thing benefited greatly from the coop nature of the game, since there had been no conflicting interests ("I see you..." "No you don't!"...). But in times, where people have to take care of each other, what better thing could there be than to play together?

As I have done on other platforms, I want to thank Joeseph A. McCullough (make sure you check his blog http://therenaissancetroll.blogspot.com/ ) for writing such an awesome set of rules and, in chase you have somehow missed it, making the Frostgrave rules and the first scenarios of Perilious Dark free downloadable (again, check his blog to see how).
So there is now no excuse for not grabbing your mobile devices, your wizard and some monsters and set of together into the darkness.

Stay home, stay save and don't let a random virus stop you from gaming together!
Posted by Hydra at 2:36 PM