Frostgrave -Perilous Dark: The things in the marshes [Prelude]

I will (again) try to "report" the games we have with the frostgrave ruleset.
In times of social distancing, we decided not to be stopped by Covid 19 from having fun and dubbed for playing "Remote Frostgrave" (as I have described in my previous post). These posts shall be a mix of eyecandy (pictures taken during the games) and the storyline I am cooking up to keep everything together. We use the Scenario Rules as described in the Frograve: Perilious Dark" Supplement, but, as we have done before, we will use these rules just as the framework and make up our own fluff and additional rules to go along with it. As the goal is to have fun, we will make changes along the way, as we see fit. 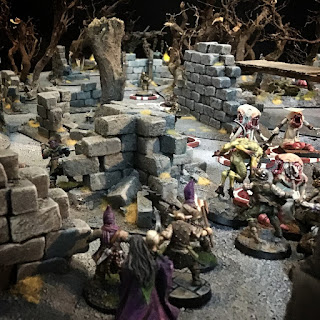 The building, that now was tavern "Shelf 23", looked like it had been drawn by a child. That had never seen a building before and originally intended to draw a tree.

Somehow only the roof had been damaged during the premafrost, that had engulfed Felstad, so that Herbert Knauzig, originally a butcher who had come to the city to rent his mountains of arms and his trustworthy axe to the highest bidder, quickly made a new buisness plan and took over the building.

Ofcause had the permafrost and, probably even more the thawing afterwards, destroyed almost any wood in the building, but the pragmatic Knauzig had found the ruins of a grand library of old near by a pretty decent provider of wood. Enough wood to fix the roof, build a counter and all the interior fitting. The seemingly endless shelves in the library were now tables, stools, smaller shelves and everything else you could wish for in a bar. The whole atmosphere was as comfortable and inviting as a butcher and his axe could manage by chopping down bookshelves.

Over the time, guests had brought "decoration" with them, so that the walls were packed with all kind of things. Above the counter was a massive, framed Werewolf head fixed to the wall, which Herbert had slain himself while it was rummaging through the trash behind the tavern. Atleast that was what Herbert claimed to have happened. Some regular guests, which had spend quite some time with staring mindlessly onto the walls, muttered in all secrecy, that the head looked more like a rather larger shepherds dog than a werewolf, but noone dared to openly question Herbert. 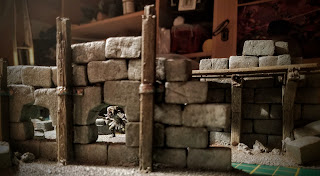 The drinks, that were served in the "Shelf 23", were the only reason, why the tavern was so popular. Herbert, being a butcher, knew as much about producing drinkable beverages, as a pig might know about casting a fireball. Nontheless, the liquid, that left the selftimbered barrels, was not only edible, but actually pretty delicious. So regular visiting wizards had the theory, that the barrel wood, which had been home to magic scrolls and foliants for some many centuries and soaked in the magic and was now releasing microportions of that eon old magic, so that the "water" from the nearby river, the kitchen slops and whatever else Herbert could find, actually turned into beer.

All though the drinks served were surprisingly good, the atmosphere in the "Shelf 23" was far from jolly. The cause for that might have been the candles and the chandeliers, that seemed to produce more shadows than to actually illuminate anything. Or the always grim face of the bartender. Or, that most guests were mercenaries, thieves, cutthroats, a few occasional wizards and other scallywags.
What ever the cause, never ever had someone tried to sing a cheerfull song or had strung a chord of an instrument, let alone start to dance.

In this sinister place, somewhere at the borders of the thawing city named Felstad, our story starts, which a hooded shady figure leaning over to another barely lit shape, muttering a few hushed words... 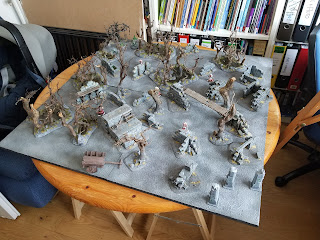