How To: Weathering on MAS-Infinity Terrain

Lately I have entertained myself with lots and lots of Infinity stuff.

And I plan on doing so even longer, since it really cought me.

For those of you not knowing to much about that game...
it is awesome
and it needs tons off terrain.

That for, I have been fiddling around with all things concerning that aspect of our beloved hobby and I will in the forseable future provide you with more and more details of my journey. It is quite a differnce to work with stuff you haven't been working with for a long time of even trying out new things.

So, today, I want to show you the basics of my approach on the Micro Art Studio Infnitiy Terrain.


So basically I was using the instructions provided by the masters of the brush, the Lords of bananas, the kongs of kings...
Massive Voodoo
BUT!

There is always a but :D

My approach was quite a bit diffrent. Terrain shall not be as time consuming as a Golden Demon entry, so I took the liberty to change a few things.
I would recommend watching the videos first, to get an idea of what I am showing you and then continue with the following. 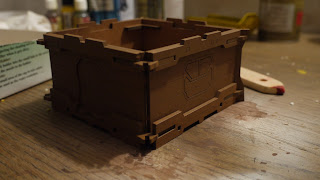 Prime everything with Leather Brown Primer spray. By now, I tend to give the terrain some random spots with Rat Fur Primer.
In the Massive Voodoo-Tutorial, they go forth and give everything a ddipping with other browntones. You surely could do that, but I wanted to keep it fast and simple and IMHO on a simple terrain piece it won't make such a differnce. 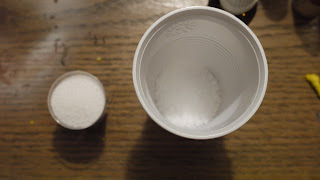 If I recall correctly, the big Apes recommend mixing the salt types and giving it a good crush to gain various grain sizes. Again, to much swallowed up time. I did the following steps: 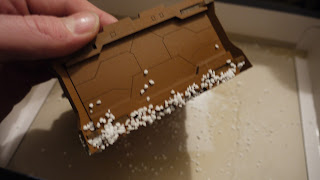 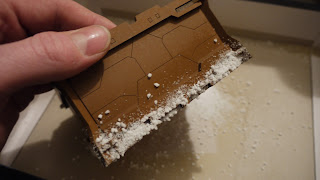 After the hairspray had been applied, I sprinkled some of the large-grain-salt onto the piece. You will notice that the big grains won't stick everywhere. To fill these gaps, I used the nomal salt and sprinkled that on the areas where I wanted a large area of masking. 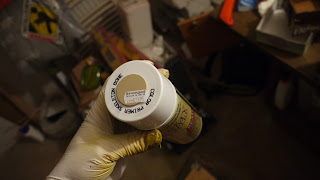 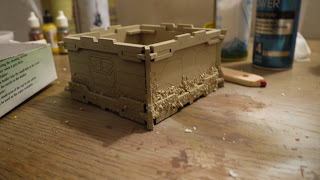 Take the colour the buliding is supposed to look like and give it a spray. I used Skeleton Bone Primer, but I have tried the same technique with other primers aswell and they work great.
You should think about the contrast, though. If you are aiming for a bright building color, the dark brown works great. If you want a darker color (i.e. blue) you might think about using some even darker brown of some carefull shots with black primer to get everything a little toned down.

Now, here comes the deal with the primer:
In the MV-Video, they are able to remove the 2nd layer of color, mimicing scratches and bigger flakes.
Since the spraypaint is a primer, you can't do that ( I will try and use the GW-Color-Spray for that soon. They claim to have non-primer-prperties... maybe it works that way.). Whereever you get paint, it will stay there.
The benefit is, you don't have to seal everything, before putting more paint on the model (again... timesaver).

When I used the salt-technique in bigger amounts, I have had the problem, that the salt mixes with water and after the water had vanished, I had salt stains everywhere. To avoid that and since we can't remove the paint anyway, I used a big dry brush to get rid of the salt (time saved again!)

After that had been done I used a sponge to get some more paint-chipping  on the wall and some pigments, to tone down some parts of the wall.

Well, that was basically it.
I hope you found this helpfull.

Nextt ime I will have a look into Graffiti on your walls. The easy way.
And how to use the bitz left over of your MAS terrain to your advantage.