Greetings everbody,
after the recent article depicted Skeletors way into the frozen city, I want to share with you the story of his adversary, Lady Yennefer and her Quest in Felstad.

As always, more after the jump. 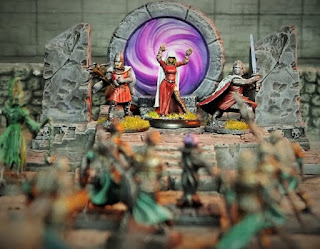 Yennefer of Klingenberg was once a well-respected courtmage until she lost everything. She lived in a secluded castle within a southern kingdom where she worked on her scientific studies and slowly expanded her influence within the mages guild. Having a moody and sometimes outright imperious character, she was still highly respected and in good graces with her liege lord for her arcane arts of soothsaying and foresight. For reasons unknown, her power failed her with devastating consequences in a moonless winter night, when the life of everyone at Klingenberg castle turned to ashes. Traumatized messengers arrived, breathlessly reporting of a huge horde of undead overrunning the county and heading for the castle. It was hardly time to call to arms before the first packs of dark unholy wolves were spotted around the castle. Not an hour later, the horde itself arrived at the castle. The fate of Klingenberg was sealed when in the commotions the guards let a convoy of fleeing peasants inside. Living collaborators with the undead had mixed among the peasants, and a brawl for the gatehouse began before the gates could be closed. Reinforced by the spearhead of the undead force, the intruders forestalled the gateclosing. When the main horde of zombies arrived, they overrun the unprotected place ans slaughtered almost everyone insight. how the undead could arrive in such speed and force at the castle or who orchestrated the attack is a mystery yet to be revealed.

In that night, the alarm signal gave Yennefer a rude awakening from restless sleep. The suffered from terrible, inexplicable headaches the whole day and went to bed early. She hurried to the Lord of Klingenberg, who sent her back to her wizard chamber to perform rituals and find out as much as the could about this mysterious attacker. But as much as the tried, her powers failed her this night, the headache becoming unbearable when she tried to focus. When she heard fighting inside the castle, she left her chambers and found horror and chaos in the corridors and on the wall-walks. In a desperate brawl, the guards were fighting the undead everywhere. As the way to the lord's chambers was blocked and the situation was hopeless, yennefer stumbled her way through the fighting and barely reached the secret underground escape tunnel. After re-emerging into the surface, she ran into the dark until she collapsed from exhaustion.

Yennefer marched several days alone through unnatural silent woods and hastly deserted villages. Finally, she found a patrol of royal men at arms, who escorted her to the capital.