Thought of the day: All we got is hope

“Highinquisitor Hotha!
I have arrived on Medusa V, as you have orderd. The commanding General, Oberst Hagen von Frohlof, has already granted his troops to my needs and requested some support units for my defence. Oberst Frohlof has given me his adjutant Leutnant Nuhauz, which has develpoted as a little mistake, since the Adjutant misjudged the situation. So 48 hours after my arrival the troops were available, which is not acceptable. I will keep an eye on his career.

Searching for the reason I’m on this planet, the damned Xenos, severall scans have shown higher concentrations of lifeforms around us, than expected. At this time we can’t identificate all of them since we have more urgent problems to handle and refugees are scatterd all over the cities. We have to check every single house, for we don’t want to kill them excidently. But if more of the lifeconcentrations should be of tyranid origin, I see only one solution for this planet…

We already met these horrible creatures and although veterans of many wars are standing by my side, none of us has ever seen something like that before.

We were on patrouille north of our base, when suddenly the scanner showed lifeforms in the area lying infront of us. Since human voices and screams could be heard, we thought that is was a refugee group. Following the voices into a alley, suddenly hell itself opend up. We were attacked from the ugliest Beasts I’ve ever seen, which came from the houses all around us. Still screaming like humans, the hit us with all force and killed most of my men, just to drive back minutes later. I have never seen this hit-and-run tactic used by Tranids before. In addition, it has never been reported, that they take the wounded withthem, normaly the fight until the last is dead. That’s the reason we have to rely with our analyses on the vid.-data from the servoskulls. 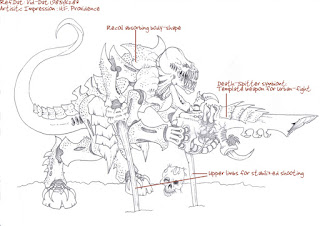 A lot has happened the last days. The urgentness of my presence and the presence of the inquisition on this planet is getting clearer and clearer.
My spies have reported that to our old problems some new have come. Space Marines with the heraldy of the 13. Company of the Space Wolfes Chapter appeared. Their motives are still unclear, but i doubt that we can trust the words of Space Marines that have returned from within the eye of terror.

Also encounters with the mysterious Eldar have been reported by some patrols. If these unpredictable alien fight on our side or not is unsure at the moment. Till now they havn´t behaved very friendly.

My biggest concern is still the tyranid threat. Their last attack is now a few days ago and it almost costed my life.
But we could capture some, dead, examples after the attack was over. A complete autopsy report is added (DAT.1983 1128a/M39). As i won´t hold you up with minor details i´ll explain the most important results.
(Ref.Dat.: Vid-Dat 1983yKz8a) 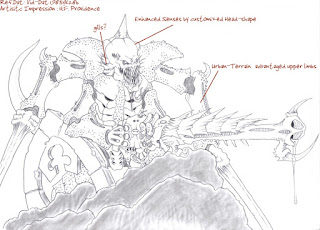 The gill-like openings on the Tyranicus Gladius Praedictator are, as i expected, some sort of enhanced sense, these organs are directly connected to the synapse-cortex (see.XENO-LAB.FENRIS-W).
The structure of their skull has no similaritys the any known scheme. All in all it seams that it was created for an independent creature.

In the mean time eight of these creatures were sighted. And now also another kind of the Tyranicus Gladius species appeared. These, for closecombat fighting designed beasts show a very strong leaping power, high agility and are especially cunning.
Thanks to theis fleshhooks, suited in their chest they can move over almost any obstacle. As they use them for climbing they have a big advantage here between all those houses and ruins.
Now we are forced to keep a watchfull eye on the walls and the roofs.
For a while it was enough to fire a good aimed shot into the head to take them out. But it seams that the tyranids realised this and now some species are wearing a kind of chitinmask, protecting the weakest points of the head.

As well as the count on tyranid warriors has increased the number of termagaunts is growing rapidly.

That tyranids are a fast evolving and mutating race is known, but there are some reasons for me why i think this kind here is even more dangerous.
First of all is their strange behaviour. As there are no breeding hiveships in orbit we believe that they found a way to reproduce themselves here on the planetsurface.
Some buildings of tyranidic origin have already been sighted, but their function and purpose is still mysterious.

The latest informations from the frontline report of another tyranid creature which follows the biggest ones. These are heavyly armoured and are used to attack and destroy buildings and fortifications.

My biggest concerns aren´t their teeth, claws and chitinous carapaces but its their DNA.

We managed to take some DNA to compare it with older samples in our archives. The highest relations we could determine is with HIVEFLEET KRAKEN. But when compared closer there are many differences.
This shouldn´t be anything new for this race, but the DNA extracted from our specimen shows signs of an external interference.

What started as a vague suspicion has come to a terrible certainty.
These tyranids have been manipulated by humans!!!

Their real purpose seems to be hidden in their DNA, we are working feverishly on the encoding of this microbiological information.
I ask you to grant me more resources and please hand these information over to our ordo. For several times i tried to contact them directly but all attempts failed. As my astropaths were either unable to fullfill their task or just vanished without any trace.

It seems as there are hidden powers working against us.

I fear the worst.
Please hurry!!! 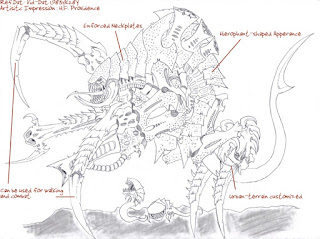 “My dear Nimrod.
Loosing you will hit me hard. All these years together you have been a loyal acolyte and pupil to me and I must admit that i have set my heart on you.
Events havn’t developed as I would have liked them to and therefore I am urged to part from you, on the long run this decision was supported by your eager work. But since i have grown so fond of you I will tell you that you have activated by opening this message an device that already contaced all important authorities.
These authorities will recieve a data-boundle which include all your knowledge about the new tyranid spieces, alot of pict-data and some extra informations. My dear callidus has borrowed your face to record these extra information, in which you confess being guilty of genetic manipulation on the tyranid species. In the end of these extras I declare you Excommunicatae and Diabolus Extremis. Please believe  me, that this has not gone easy over my heart, but I could convince the Conclave to this drastic step and so it happens in their and His blessing.
Of cause you have the right to know why all this is happening to you and if you are willing to sacrifice the time for your escape for this information you shall be enlightend.
Even before you entered my retinue, I have been working on this project on a planet called Epistolarius VI. All these years i tried to manipulate the tyranid-DNA to reach my dream...
Please understand why i did this! I wanted to free the human race from all the threats and put it back to the unbattled top in the galaxy. Originally the new tyranids should infiltrate their own race, grow in small colonies next to their kin and when they reach a decent size break from their hidings and destroy their own race. Attacking from severall places at once was the reason for the name we gave them: Hydra.
This weapon would have given us the power to destroy not only the tyranid threat. Think about the possibilities! A few spores on a planet and within a year all filthy xenos scum on it would be gone and the planet itself would be ready for human colonisation. We would have found peace and could have lived without fear.
One day our researches we developing pretty fast and soon we were able to create Echidna. In former mythology, Echidna was the mother of all monsters and now she should be the mother of our monsters. The DNA we combined with hers  where taken from samples of the Hivefleets Kraken and Moloch, which enforced Echidna to have access to the full variety of a tyranid swarm. Soon she was big enough to start breeding. The blocker, which excluded the human race from her prey-list, we had set into her brain was so efficient that we let some of the creatures run freely through the laboratories and some of my scientists we playing with them.
Then I left the planet to gather some final information, before I would show humanity my masterpiece. But when i came back, I couldn’t establish contact with the research-facility and even the drop-pods didn’t respond after their landing. A horrible suspicion came to me and i contacted four chapters of the Adeptus Astrates and made them attack the planet because of a subterfuge. But they just fueled the fire.
Soon none of the brave warriors was left, but the pict-datas they send are still hauting my dreams. For some reasons unknown to me the Hydra threw off the leashes I had put on her and attacked everything that moved.

Please believe me when I say that I deeply regret what I have done!
Maybe now you can understand my position and why I could not let the truth come out. But to make your escape easier, I will tell you what the genetic programm of the Hydra will do next.
The phases you are describing  are the first two: probe and colonise. More specimen of the warrior-typus will emerge to streangthen the synaptic bond. Their weaponry will be like the most efficient they have already grown. I take from your reports that the close combat variant will be most likely to be chosen. Another important part of the third phase is exploration and expansion. For this task winged specimen will be bred to operate independently from the terrain. Lictors will most likely appear to collect information from the enemy and search for new grounds to colonise. So keep your Auspex always in sight.

That is all I can do for you.
I hope that you will escape and since the Hydra is free now, find a hiding place. Only the Emperor Himself can help us now. I will retreat aswell to my hideout.

May the Emperor be with you and fare well